Stewarts and Lloyds who, at the time, owned the large steel works at Corby in Northamptonshire, were in the process of undertaking some improvements to their branches to ironstone pits. One such pit, Harringworth, was not on the main steelworks railway system, and required trains to be worked over the London Midland and Scottish Railway line in the area. To avoid this, the company extended its own network of quarry lines to the pit and identified a need for some powerful tank locomotives for this long haul traffic.

A total of nine saddle tank locomotives were ordered for this traffic from Robert Stephenson and Hawthorn based in Darlington. the locomotives have short saddle tanks and large fireboxes, giving a somewhat ungainly appearance. However, the locomotives are more powerful than a Hunslet Austerity locomotive.

Number 56 was the first locomotive in an initial batch of seven locomotives ordered in 1950 and worked trains between the quarry and the steelworks until 1969 when replaced by diesel traction. 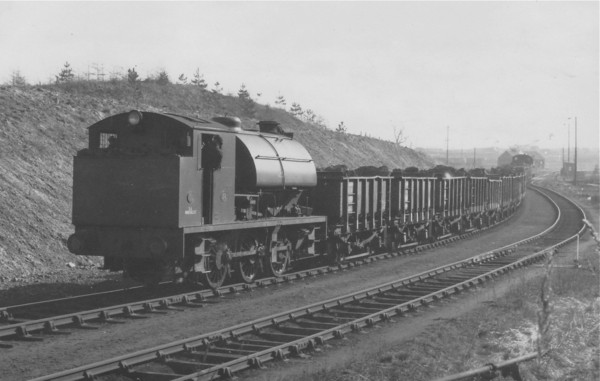 Entering preservation, the locomotive initially worked at the Kent and East Sussex Railway before moving to the newly opened North Woolwich Railway museum on static display in 1984. When that museum closed in 2006, the locomotive moved to the Great Central Railway (North) in Nottingham. Following further service, there, the locomotive was stored upon expiry of its boiler certificate. It was moved to the Epping Ongar Railway in February 2021 alongside its sister engine, number 63.

Number 63 was part of a second batch of two locomotives and was delivered in 1954, becoming the eigth of this type of locomotive at the site. It, too, was withdrawn in 1969 when replaced by diesel traction.

The locomotive currently wears a green livery and is named "Corby".