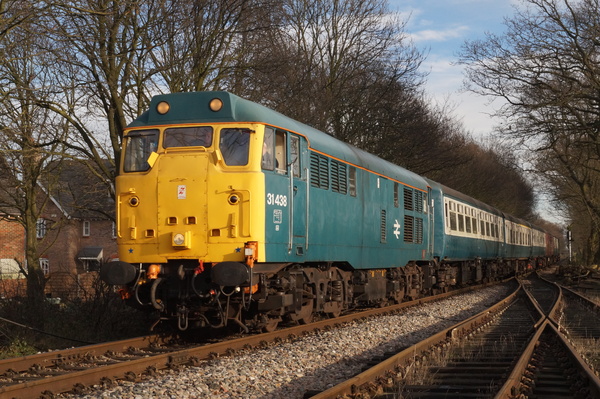 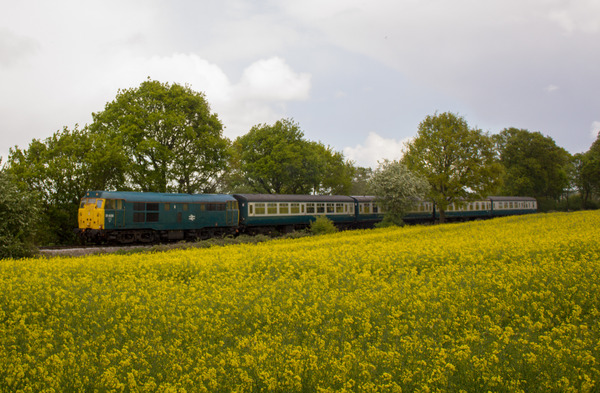 Class 31 locomotives were regular performers on secondary line and freight duties around the East Anglia area, with the first of the class being allocated to nearby Stratford Depot (30A) making it rather appropriate that one should now be based on the line.

"Class 31" 1,470 BHP English Electric locomotive 31438 was constructed at the Brush works at Loughborough during the Summer of 1959 and went via Doncaster works for acceptance testing. It was delivered new to the Ipswich loco shed (32B) as D5557 and was made available for traffic on the 15th October 1959.

In June 1961, it was transferred to the Norwich shed (32A) where it stayed until March 1965 when it was reallocated to Tinsley (41A). It carried the D5557 number until early in October 1973, when it changed to the TOPS number of 31 139 and was one of the first to be repainted in the BR blue livery. Prior to that, the loco was unique as a Brush Type 2 in that it carried the Brunswick Green livery with the BR arrow symbols on all four cab sides and with the numbers behind the doors.

It survived the first reduction in the fleet of Class 31s, having been mothballed at Swindon in 1981 for approximately six months. At this stage, it was selected to have electric train heating equipment fitted and to have a Heavy General Overhaul. This was completed, and the loco was released back into traffic as 31 438 on 23rd April 1984. Until December 1993, it spent its time hauling passenger trains in the north west, working out of Crewe or Wigan sheds, after which it was transferred over to infrastructure work as 31 538. It was finally sent to Carlisle to be stored as serviceable in September 1995.

Thanks to the dedicated work of her former owner, she is in full working order and has proved herself to be a regular and reliable performer. 31438 arrived on the line in October 2011 and has both air and vacuum train braking systems, making it a very flexible machine as can work with all the coaching stock on the .

Although in general our class 31 was in good mechanical condition, her external body and paint work was in poor condition and both cabs needed remedial work.

In September 2012 a small team of volunteers began work on repair and refurbishment of both cabs. This include rebuilding of all cab doors (a long and skilled job) , replacement of floor/ sub floor and wall panelling on a as required basis. Repair and replacement of all cab seat upholstery, Completed repainting of cabs . Cleaning and painting the engine room as required. Plus many other minor works.

The Loco was withdrawn from traffic completely in March 2013, for body work repairs and preparation for a complete repaint. The opportunity was also taken to remove and remanufacture the locomotives brake rigging which was found to be badly worn in places.

Every effort has been taken to return the locomotives colour scheme as she would have looked ex works in 1982.

The locomotive was completely repainted in BR corporate blue with yellow cab ends. We took a lot of trouble to obtain the correct transfers appropriate to her 1982 corparate livery.

After a huge amount of working hours and a considerable amount of money having been lavished on her, the class 31 locomotive returned to traffic in September 2013.