The line-up of buses for Epping Ongar Railway's first bus event of the year - "Everything Has Doors" - on 18th February 2018 includes two buses making their debut public services in preservation.

This event will celebrate "One Person Operation" (OPO) buses. All buses at this event will have doors - no open platforms in sight - including those operating our normal 339 service between North Weald and Epping Underground station.

It is a running day and we will be operating trips from North Weald to a variety of destinations, recreating former routes that ran in the area.

The line-up includes GLS 490, a rare survivor from the batch of Greenway Nationals that were used on the Red Arrow services. Despite being listed on some enthusiast sites as 'presumed scrapped, it certainly isn't and will be in service at the event! It is joined by RMA 48 (NMY 631E) making its first ever appearance in public service since its career with BEA that finished almost 40 years ago. 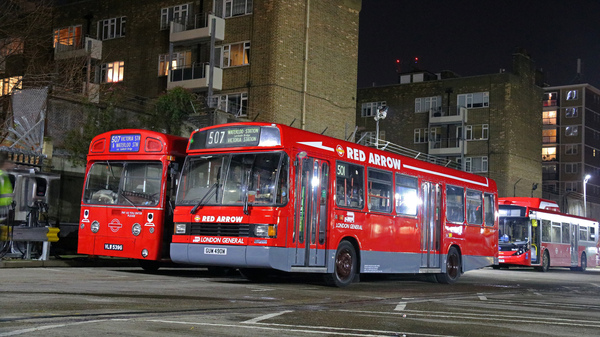 These two vehicles will be joined by a cast of RF buses, SM1, T1 and MBA539 among others. There will also be some surprises on the day!

Steam and diesel trains will also be in operation between Ongar, North Weald and Epping Forest and our great value fares allow unlimited travel on the trains and buses, including the additional bus services operating on the day!

For further details and to book tickets please follow this link.