The Penny Salon into Autumn and beyond5th August 2018

August 2018 will be marked at many heritage railways throughout Britain as the 50th anniversary of the end of main line steam on British Railways on 11 August 1968 and the steam ban that was placed on BR tracks following this. At the EOR, we are remembering this by an exhibition in the Penny Salon gallery at Ongar station Barry and after: fifty years since the end of main line steam.; This features pictures from the last years of steam, early preservation, and the return to steam on the main lines following the lifting of the steam ban. The role of the National Railway Museum in returning locomotives in its collection to working order, and the restoration of engines rescued from Barry scrapyard are also featured; culminating in the current range of 'newbuild' projects, and not forgetting the rise in diesel and electric preservation. 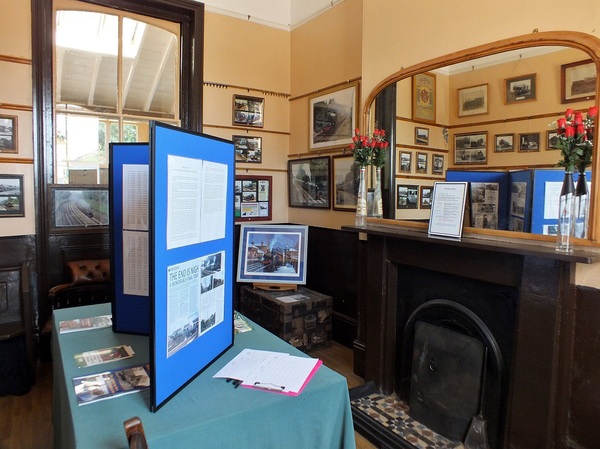 Following on from this, The Penny Salon is working on two special presentations Epping Ongar Railway visitors' viewing throughout the September and October operating days.

"Farming from the 1940s ..." with most of the pictures not viewed before. Those that saw Reg's pictures of pubs and pub- signs to compliment the Real Ale weekend may know what to expect.

We start a trilogy of exhibitions from the lens of Geoff Silcock. The first of these goes live from 6 October. Entitled "And the Night comes on ...", this will cover over 5 decades of mainly railway subjects, from the afternoon shadows, through "Glints", silhouettes and "After-burn" then into the night itself. Starting with black and white subjects together as an art form for the first 20%, then it switches to colour, mainly in A3 and super A3 and recently even some A2 size ones. The result is truly awesome. Most of the subjects have never seen by an audience before.

Into 2019, the second title will be "The Last Beasts of Man" all in the black and white art-form, which graphically shows the final struggle of the last NCB steam locos, and indeed the industry itself in some of the last locations in South Wales around 10 years after steam finished on British Railways.

The third will be the continuation of "And the Night comes on ..." theme, and will be entitled "Into the Morning ...".