You don't need to be a steam train buff to enjoy at first-hand the third of the steam aficionado Geoff Silcock's 'Best of the Best' trilogy "Into the Morning" at The Penny Salon Gallery at Ongar Station.

He has saved much of his best free-wheeling photography until last, with over forty five framed pictures expected to be on show in both colour and black & white. Many of Geoff's favourite subjects on show are from the 1960s, or from the 1980s to the present day, including many that have only been recently scanned and printed.

A highlight also on show is the super large cast brass nameplate and its 1934 building plate, that were used by Geoff 26 years ago to change the identity of the world famous Gresley pacific engine, Flying Scotsman for a series of photographic charters. 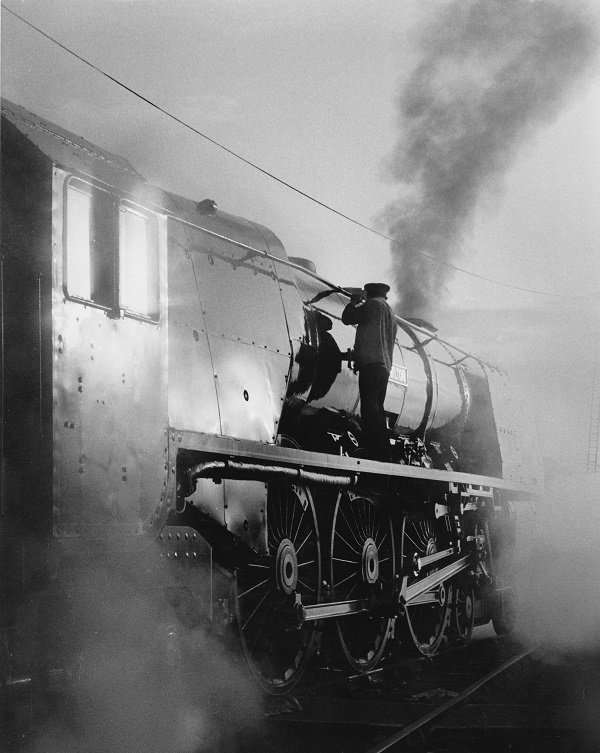 The exhibition is divided into 8 segments, taking the viewer from the expectant mood of steam around daybreak, through empowering images of steam locomotives ready to unleash their power. Themed daytime scenes then take centre stage before stepping up a gear onto the main line scene. The final segment draws upon the poetry of Robert Louis Stevenson that Geoff lists as one of his prime mentors over several decades,  as the flowing images of steam retreat back into town and countryside.

Although his day job was in photographic developing and printing for over 45 years, Geoff's original hobby of recreating the steam trains of his youth in film and print came back to the fore in the early 1980s, when after winning first prize in the prestigious L.C.G.B. Annual Photographic Competition for 4 years running, he was then offered the role of their Photographic Secretary and Senior Competition Judge. He became the youngest person ever to do so, and it was a position that he fulfilled for several years.

Into the early 1990s, Geoff went on to pioneer photo- charters under the banner of the non-profit making "Sentimental Journeys", delighting many photographers. Latterly with like- minded Russ Hillier they together undertook over 300 charters at 43 locations over 23 years, whilst raising in excess of £700,000 for, mainly, heritage railways such as the Epping Ongar Railway. As well as also assisting in bringing back small steam locos to several docks still with working rail systems, Geoff's highlight in 2002 was to bring back a steam engine, complete with the famous logo, to the home of the internal combustion engine in East London, Fords of Dagenham.

Over those many years, Geoff has produced over 100 articles in specialist magazines, and has over 980 published images to his credit, with more in the pipeline.

Since May 2017, Geoff has mainly forsaken his predatory steam photographic life, to be the fellow Principal, a  role shared with next street neighbour Malcolm Batten, presiding over the bijou "The Penny Salon", formerly the Ladies Waiting and storeroom, situated opposite the ticket office at Ongar Station, with the intent of presenting images, mainly of steam trains and of pictorial Essex itself, especially in photography and painting formats.

It is a winning combination, as in the first full year of operation, Geoff and Malcolm personally "Meeted n' Greeted"  the greater majority of an approximate 7,500 visitors to The Penny Salon

The exhibition of the Geoff Silcock "Into the Morning" at "The Penny Salon" in Ongar Station will go live from 10.00 a.m. on Friday 19th July, when you can meet both Geoff and Malcolm, who will be "Meeting n 'Greeting", with "Bucks Fizz and Munchies" expected to be dispensed earlier on. There is a also be another free easy to enter competition as previously, with prizes of free tickets to ride on the Epping to Ongar Railway in the future.

The final presentation of the 2019 Penny Salon "season" starting on 8th September will feature the 25th Anniversary of the closure of the Epping to Ongar Railway, through to the present day.

The Penny Salon Gallery at Ongar station is open whenever trains are running, and admission is free.