Over a hundred passengers travelled on the Epping Ongar Railway’s first steam-powered Real Ale Train on 9 June 2018. Along the way the passengers managed to work through the 7 different casks drinking 303 pints and consuming 50 portions of fish and chips. For the duration of the service a pint was on average being consumed every 70 seconds. Surprisingly there were only 7 pickled eggs left at the end of the event. Beer for the event was supplied by two Essex breweries. 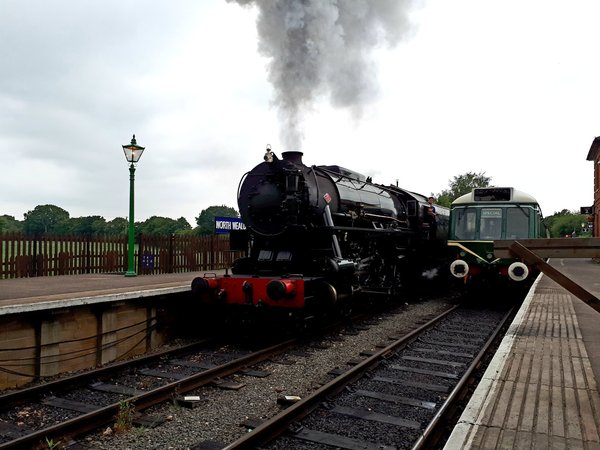 Alan Perryman, organiser of the train said ,"We're very pleased with the success of our first Steam Real Ale Train - it's given the teams good practice for the big event in July, our Real Ale Weekend"

The EOR has teamed up with the Campaign for Real Ale (CAMRA) to run a joint Real Ale Weekend over the weekend of 20-22 July. This much bigger event will also feature a couple of onboard bars but a also a full-sized beer tent. Across the weekend there will be around 75 Real Ales, and 20 Ciders on sale. The event has grown over the years and is now a major festival in the local area.

Dean Walton, Business Development Manager, said, "A good number of people from Ongar and North Weald came along too and made use of the half-price fares with their residents railcard. It's our way of giving something back to the local communities near the Railway. I remain surprised that we managed to sell so many pickled eggs."

Trains for the evening were hauled a powerful war-time locomotive, United States Army Transportation Company S160 class, which arrived at the Epping Ongar Railway in the previous week.