During October the Penny Salon presented the first part of Geoff Silcock's trilogy of 'best of' photographs entitled And the Night Comes on. The public were asked to vote for their favourite three photographs from the forty on display and a competition was held to see who would come closest to picking the three which would receive the most votes. This proved very popular and 260 voting slips were received over the 10 operating days that the exhibition was on display. The people's choice as their favourite photo was a silhouette at sunset taken on the North Norfolk Railway which received 72 votes. Second was a staged night shoot with crew and locos around the turntable in Barrow Hill Roundhouse with 61 votes. Third was the unusual sight of sheep crossing the line on the Dean Forest Railway looking all the world as if they were trying to recreate the cover of the Beatles Abbey Road album!. This gained 55 votes. Incidentally this was closely followed in fourth place by a photo on the Epping Ongar Railway - a night shot through the booking hall at North Weald. 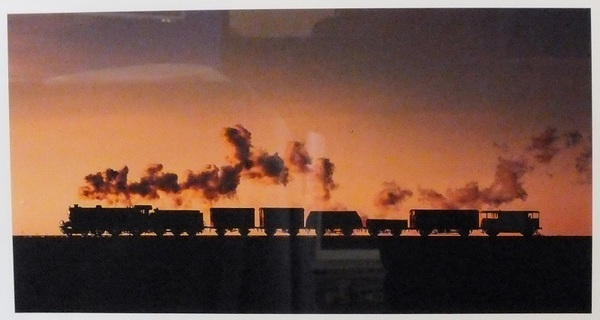 Only one person picked the top three in their correct order, so congratulations go to Ms Lucy Sulman who wins a pair of tickets to the railway for next year. Two runners-up will also each receive a day ticket and all three will be notified directly.

Thank you to everybody who took part. The next presentation at the Penny Salon will be after Christmas for the Mince Pie Specials and New Year Steam Day and will be a return of the popular Snow on Show theme with a mostly new selection of photographs and art works from the regular presenters and guest contributors. This will remain for the February half-term operating days when children can travel on the Epping Ongar Railway for just £1!.

Look out for details of the new programme from April, including the second and third parts of Geoff's trilogy.

This year will mark 25 years since closure of the Epping to Ongar line by London Underground in September 1994 and we will celebrating the progress since then throughout September and October.