May and early June in the Penny Salon9th May 2018

The latest major presentation and exhibition (with 123 pictures in  frames at the last count) at "The Penny Salon" in the c. 1865 Ongar Station is a pictorial over-view of London Transport from its inception in the early 1930s through to preservation. This also highlights the latter-day Epping Ongar Railway at the time of its own London Transport Weekend on 12 and 13 May, with the exhibition then running on to the 8 June. 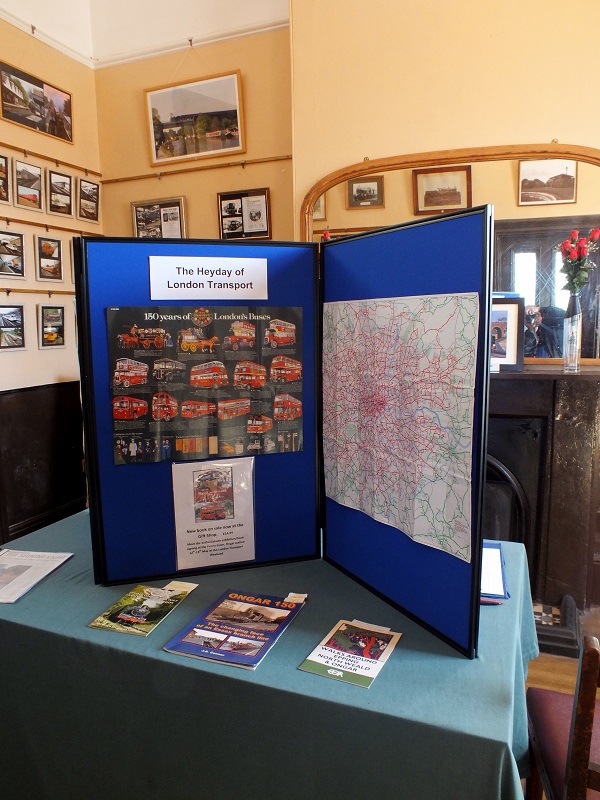 The format for this years current London Transport presentation and exhibition was put together by The Penny Salon's Geoff Silcock's colleague Malcolm Batten, who will also be present on both the 12th and 13th May at The Penny Salon for signing copies of his new book entitled "East London Buses 1970s - 1980s " which will be on sale from both the Epping Ongar Railway giftshops at Ongar and North Weald.

Malcolm has three other books in preparation on the same subject, and covering the later decades in the same geographical area, and these are expected to be published into the Autumn. There is talk of future books from a major publisher from both Geoff and Malcolm, and which will include Malcom's father Reg's archive of subjects, especially of the villages from around Essex from the 1930s - 1960s that have had regular inclusion in many of The Penny Salon presentations at Ongar Station.

Following on from this exhibition, to mark the first anniversary of "The Penny Salon" at Ongar Station, there is the promised  visit of Malcolm Root FGRA. with the viewing of many of his own favorite paintings in abundance on the Saturday and Sunday of 9 and 10 June. This will also showcase Malcolm's latest painting which will be released in early June, and has as its inspiration our own Epping to Ongar line in the early 1950s, when the line to Ongar was connected by the steam "Push and Pull" trains from Epping Station. These were finally replaced by the tube train shuttle service in November 1957, and these would continue until the lines closure by London Transport in 1994. This two day showing of Malcolms Root's paintings with limited edition prints available of many of the subjects is an unique occasion not to be missed, and another great reason to visit the Epping Ongar Railway over its extended Steam Gala Weekend.