Malcolm root painting to be unveiled at Steam Gala31st May 2018

To mark the first anniversary of "The Penny Salon" at Ongar Station, Malcolm Root FGRA will be alongside many of his own favourite paintings on 9 and 10 June. This will also showcase Malcolm’s latest painting due to released in early June which is inspired by the Epping to Ongar line in the early 1950s, when the line to Ongar was connected by the steam "Push and Pull" trains from Epping Station.

During the two day showing of his paintings there will be limited edition prints to view and buy.

“The Penny Salon is now one year old and a great thank you must go to Geoff Silcock and Malcolm Batten who have created this wonderful gallery space and the displays which go into it. Moreover the weekend of 9 and 10 June with Malcolm Root’s wonderful work will be a unique occasion not to be missed, and another great reason to visit our Epping and Ongar Railway over its extended Summer Steam Gala Weekend.”

The new Malcolm Root painting will feature one of the Holden F5 2-4-2Ts in its final years of service with its 2- coach push- pull train at Epping London Transport Station.

He added, “Malcolm is rightly held in the highest regard for his wonderful compositions. It is an honour to host him at the Epping Ongar Railway with a new painting featuring a locomotive and coaches that almost 70 years ran to Ongar.” 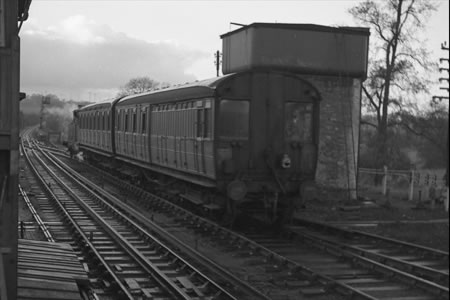