Esoteric Steam at the Penny Salon this Autumn2nd September 2021

The latest exhibiton at The Penny Salon Gallery at Ongar station, "The Esoteric Steam of Geoff Silcock", goes on display from the start of September.

Conceived in early 2020, the long awaited first part of the trilogy features several themes, starting in the London area with 'The Beginning 1961 -1964', and continues with the 'Metropolis', a series of images in colour from the 1990s to the present day. The action then switches to 'The Eastern Counties', with both 'Main' and various heritage lines featured, to which Geoff had special access, as his specialist charter company "Sentimental Journeys" sponsored several events at several of his favourite railway locations. 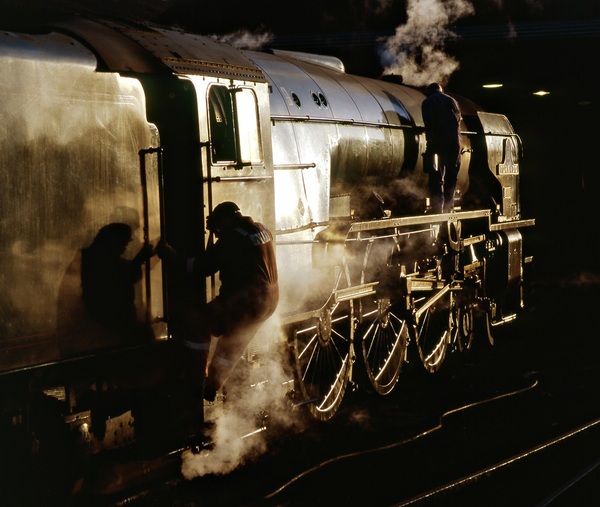 The exhibition moves into the Eastern Counties comprising 'Just a Station on your way', and Geoff's favourite 'Off the Beaten track'. It culminates in 'And the Night comes on' and finally 'Nocturne - The Dark Curtain'.

Geoff found it was possible to continue with the 'super-scanning' and the printing of his favourite images, that now span over six decades during the lockdown, and resulting in over 80% of the A3 size and above framed enlargements on show, not being featured previously in The Penny Salon presentations previously.

You don't have to be a steam buff to appreciate the added dimension of steam seen around the Metropolis, and then into the Eastern Counties, which includes the latter day Epping Ongar Railway itself. Give yourself time on your visit to absorb the commentaries by Geoff himself or his associate Malcolm Batten, recalling the results of several of 102 articles in the heritage press, authored by him, along with many of Geoff's favourites from over images, that were published in specialist photographic and railway magazines over the years.

The exhibition runs until the end of October and is open whenever the Epping Ongar Railway public services are operating. You can find details of train and connecting heritage bus times by selecting the date of your visit here.

The output of "The Penny Salon" consists partially of the well established work of Eastender Reg Batten, who achieved his 100th birthday before he passed away in 2014. Reg spent much of his leisure time from the 1930s until he was well into his 80s, recording images from the now bygone world around him, especially from around Essex; Malcolm Batten is the custodian of his fathers work, and continues the family tradition, with countless photographic images published in magazines, plus several articles to his credit, and with published books on related transport subjects; and Geoff Silcock, with well over 50 years overall involved in the pursuit of his passion for especially steam trains, including  its related photography and railway journalism content, with over 100 published articles in specialist magazines over the last 25 years. Plus he assures everyone that he also found the time to spend over 45 years in the photographic "D&P" profession from the early 1960s.