In this section: Why do we need signals? | Signalling on the Epping Ongar Railway | Volunteering | Ongar Signalbox | North Weald | Thanks 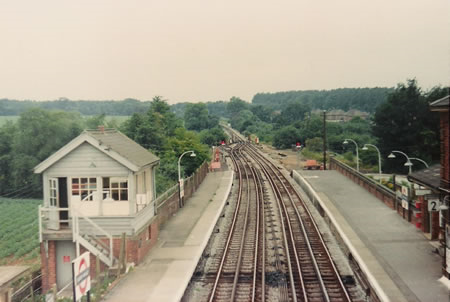 Why do we need signals?

Since 1889 (the year after North Weald signalbox was built), it has been a legal requirement to lock and prove that points are correctly set on passenger lines. A signalling installation ensures the correct setting and "locking" of points and to control train movements in order to ensure passenger safety. A signalling system is part of the essential infrastructure so we can run more than one train, both steam and heritage diesel on the line.

Signalling on the Epping Ongar Railway

Following discussions with the other Heads of Departments back in 2008, we drew up a signalling plan which will meet the requirements of the railway over the coming years. This plan was presented to HMRI (Part of the Office of Rail and Road), and was been approved with no objections. Many elements of this plan have now been installed and the team are well on their way to progressing the system to its final phases.

North Weald is our passing place, and following 5 years of work has been signalled to allow trains to arrive in either direction into both main platforms. The signalling here includes access into both the Up Yard and Engine Shed sidings and to allow passenger trains to use the bay platform.

Ongar is the eastern terminus of the line and the signalling system here will be installed in phases. The first phase has enabled the locomotive to change ends (run-round) when the single line token is placed into the special instrument connected to the system. The latter phases will increase the number of shunting moves, both control the expanded layout, allow trains to arrive and depart from both the main and bay platforms, as well as enabling shunting to happen between trains. 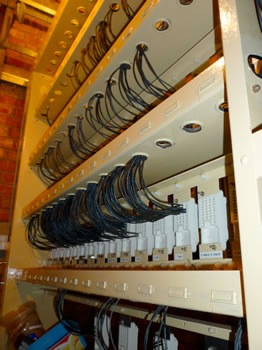 Much of the equipment has either been donated/rescued from the mainline network, London Underground or has been obtained through working with other heritage railways. The signalling project on EOR has enabled the preservation of a wide variety of signalling equipment, some of which has not been preserved on other heritage railways. Whenever practicable we continue to make great efforts to incorporate signalling equipment that was typical of GER/LNER/BR(E) or LUL examples. 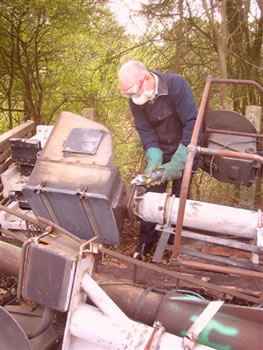 One of our team restoring Ongar's Inner Home signal, the square box will indicate to the driver which line / platform he has been routed into.

The signalling team doesn't only restore, install and commission equipment - all the equipment needs regular servicing, both to ensure the safety of trains, its reliability to keep the equipment operating and preserved for future generations.

In the future it is also hoped that there could be a signalbox at a station at the Epping end of our line to enhance our operations. We hope that each signalbox reflects a particular period in history and so acts as a unique preservation and educational resource.

We have teams both at weekends (Saturdays & Sundays) and weekdays, and some of the items are small enough to be taken home and worked on in your garage / shed.

No prior experience is necessary, and full training can be given. There is no minimum number of turns and we are more than happy to see you whenever you can spare some time.

If the answer to any of these is yes... don't delay; visit the volunteering page for details, or contact us.

The original GER signalbox at Ongar was taken out of use following closure of the goods yard in 1969 and sadly demolished by LT in the early 1980s.

Following many hours of efforts behind the scenes, and a number of set-backs, we finally managed to secure an original Great Eastern signalbox for Ongar. This was originally the top half of Spelbrook which was in storage at Mangapps Railway Museum. In February 2010 the top half was stabilised and made safe, before a few weeks later on 26th March 2010 it was lifted onto a vehicle and carried down the A120 & A414, much to the surprise of passing traffic! 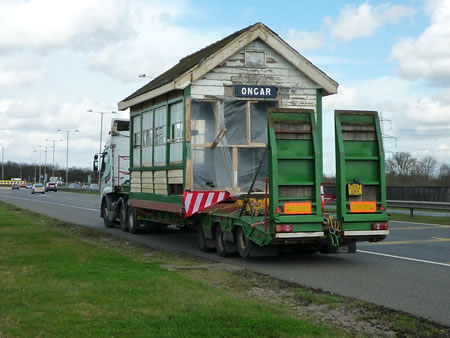 Following arrival at Ongar new foundations were dug, very close to the footprint of the original, and metal legs were made that connect with the custom made metal supporting and lifting frame, to hold the box at the correct height and to hopefully be ever-lasting. 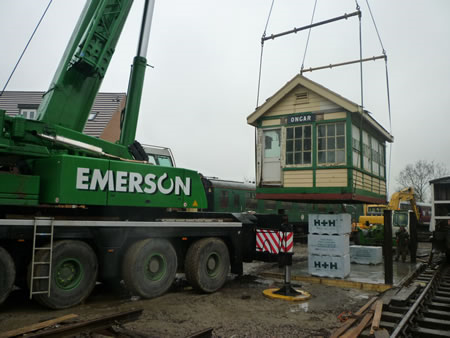 The volunteers worked to recreate the lower half from scratch, complete with locking room window, and extensively restored the upstairs. This included nearly completely rebuilding the west end which had been heavily altered by BR and suffering from years of decay.

The original Ongar lever frame came to light, and was kindly made available to us by CHT, and so this was lifted into the box, with the floor supports and floorboards adjusted to accommodate the Saxby & Farmer frame (as Spelbrook had a McKenzie & Holland lever frame which has different locking access arrangements). This lever frame was a remarkable find, and it is very fitting that the 1888 frame will once again be signalling trains at Ongar, from a GER type 7 signalbox. In common with the rest of the buildings at Ongar, this has been restored into GER colours, as the original would have looked between 1880s and 1930s. 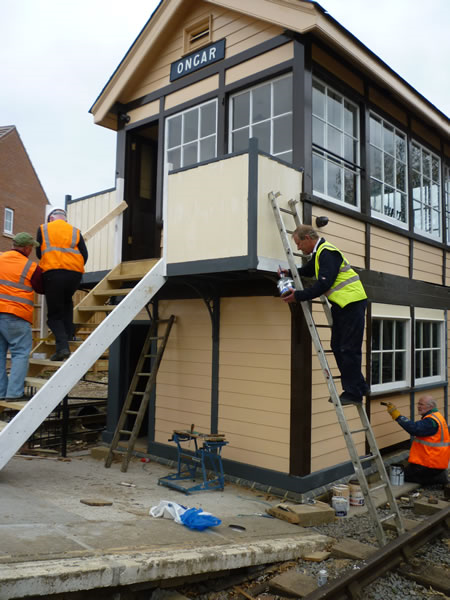 Focus then turned to the signalling installation, both in the signalbox and relay room. The signalling will evolve and be commissioned in phases. These phases will progress as funds and volunteering time becomes available. This enables the railway to make use of the signalling equipment piece by piece as it is commissioned and also to evolve to meet the anticipated future needs of the railway. 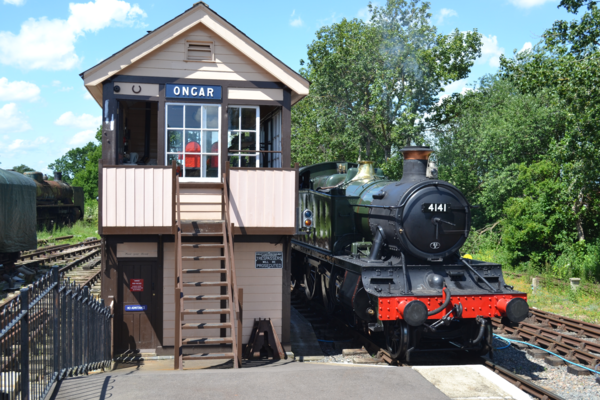 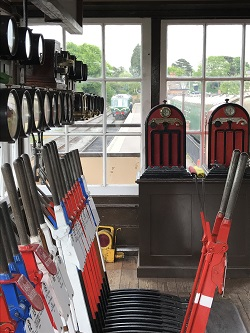 The signalbox at Ongar will communicate with the next adjacent box at North Weald , with the later phases of the signalling allowing a greater flexibility in the operations, additional platforms to be brought into passenger use allowing a higher frequency of trains. This will help cater for the busier operational days and to handle different trains as the railway looks towards operating trains to Epping.

The establishment of the passing loop and signals at North Weald was an essential element to enable the reintroduction of steam and diesel locomotive hauled trains between North Weald and Ongar, and for the first time since 1976 enabled more than one train to operate on the branch. 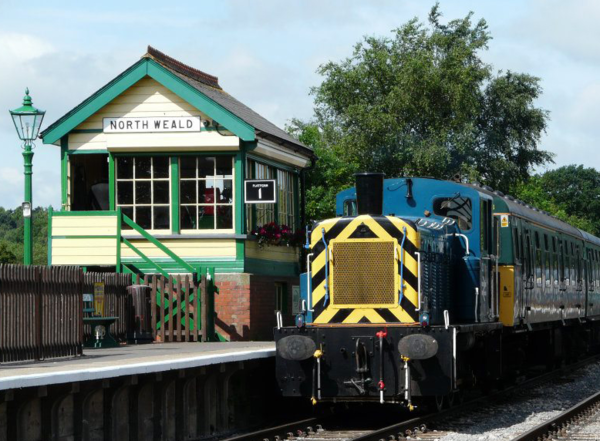 Between 2007 and 2012 the team restored the fabric and fittings of the original 1888 GER signalbox, which is now back to its former glory, resplendent in 1940-1960's LNER / BR (Eastern Region) colours, complete with its original Saxby & Farmer 1880 pattern 21 lever frame to control the layout. Many of the signals are in similar locations to the original 1949-1976 layout, with a few additions to assist with the running of both heritage and local community services. 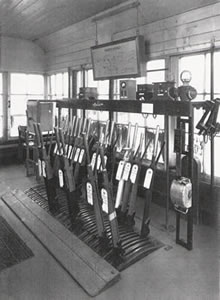 North Weald bay platform has been re-instated for passenger use, to enable additional operational flexibility and accommodate a Diesel Multiple Unit shuttle running from North Weald through the picturesque forest towards Epping.

We hope that putting back mechanical and heritage colour light signals around the station and the view from the platform of the signalman "doing his stuff" with the clank of the levers and bells adds to the authentic atmosphere of this period station, as well as preserving a range of signalling equipment from the local area, so the system reflects signalling in East Anglia though the ages in order to be both an educational and preservation benefit to future generations.

The Epping Ongar Railway would like to take this opportunity to thank a number of companies who have been assisting us with obtaining and preserving our signalling heritage, and enabling us to run trains.

As well as many of the other heritage railways near and far who have provided support and assistance to the railway as we work to follow in their footsteps in installing a heritage signalling system.