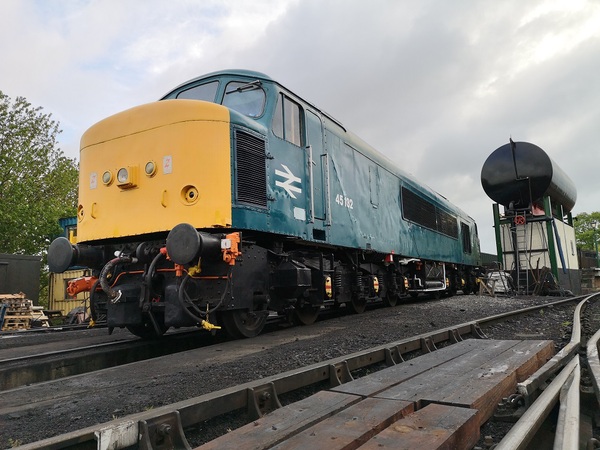 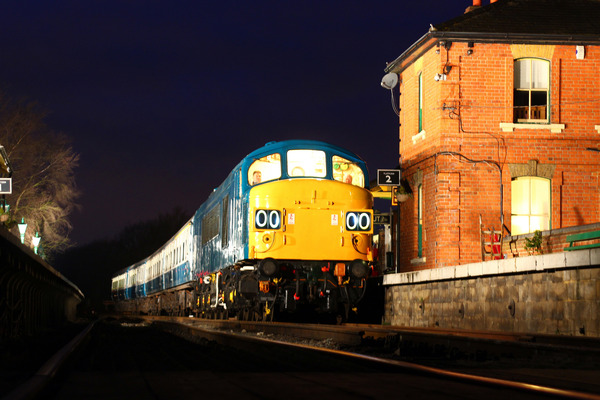 45132 was built as D22 in 1961 by BR Derby works, as one of the first of the BR/ Sulzer type 4 locomotives - nicknamed 'peaks' because the first 10 outwardly similar locos carried the names of English and Welsh mountains.

As a new engine, D22 was allocated to 55A Leeds Holbeck shed, from where it operate Midland region trains on the line to St Pancras. It is also known to have worked the Thames-Clyde express from St Pancras to Glasgow St Enoch, and The Waverley, which ran from St Pancras to Edinburgh Waverley. In the 1970s, steam heating of trains was being phased out, and it was decided to convert 50 of the class 45s to electrical train supply, creating two subclasses of class 45 - the unmodified class 45/0, and the ETH fitted class 45/1. The selection of locomotives for conversion to class 45/1does not seem to have followed any pattern, however D22 was one of those selected, and was fitted with the Brush alternator and had the original auxiliary generation gear removed. Upon emergence as an ETH fitted machine, D22 was numbered 45132 - unlike some of the 45/1 locos, it never carried a 45/0 TOPS number. As an ETH fitted locomotive, 45132 spent the majority of it's time hauling passenger trains of some description, right up to withdrawal.

It spent most of it's life allocated to Toton shed, from where destinations as far flung as St Pancras, Holyhead, Carlisle, Newcastle and Plymouth were reached, generally on Passenger workings. Towards the end of it's life, the headcode boxes were removed, in common with similarly fitted locos, of both class 45/0 and 45/1. Of all four types of peak, the class 45/1 lasted the longest, no doubt due to the ETH.

45132 was withdrawn in 1987, having failed at Kettering on a St Pancras to Derby working with a siezed triple pump (which pumps fuel, oil and water around the engine). Within a matter of days, it had been dispatched to March in Cambridgeshire - a depot more synonymous with class 31s - for storage along with a number of it's classmates.

Recently the locomotive has undertaken some test runs, but remains under restoration.