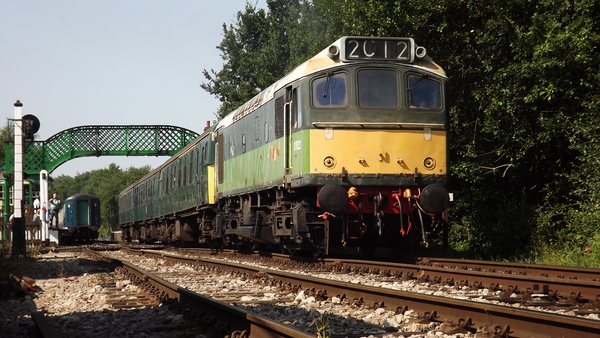 The BR Class 25 originally numbered 327 examples built, of which 20 examples were saved and about 11 are in operation on heritage lines around the country. Our engine is a 25/2, which featured restyled bodywork (without the earlier gangway doors in the front) and slightly different air intakes from the first batch built. While the Southern and Eastern Regions of BR were never allocated this class, they were often seen in East Anglia on inter-region passenger and freight workings and excursion work.

The construction of D7523 started with the main support frames being laid during early 1964, delivery to the Nottingham area occurring in January 1965. The locomotive remained a Midland Region based machine throughout its career which ended with withdrawal on 19 March 1987, being one of the last locomotives of the class in service. The engine was fitted with air brakes (making it dual braked) during a routine overhaul in 1978.

D7523 was officially withdrawn at midday on 19th March 1987 at Crewe and was immediately sent, along with several other locomotives, to Vic Berry's scrap yard in Leicester. Normally the processing of scrap loco's and dumping them on the 'pile' only took a few days but for some reason D7523 (or 25173 as she was) lingered and on 13th September that year, 25173 left the yard again and returned to Crewe works for repairs. This was unexpected as all of the class had been officially withdrawn in March 1987. Over the following two years the loco alternated between Crewe works and Berry's yard, each time it visited Crewe it received further repairs. Finally on 1st June 1989 the locomotive that refused to be scrapped left Crewe and headed for the Dean Forest Railway and into preservation. D7523 spent 15 years in service at the West Somerset Railway, proving to be a useful engine for both light passenger and engineering trains, being maintained to a very high standard by the Diesel Electric Preservation Group at Wiliton, before coming to Epping Ongar Railway in September 2011.