The life and times of 'Badger' - our little track machine

When I was a young train driver, I remember the emergence of strange little ‘on track machines’. These little yellow beasts, sometimes with a trolley attached for small ballast jobs, or may be the type for overhead wiring work with a scissors lift, were often observed buzzing around work sites.  These machines, because of their diminutive size, were often festooned with lights to make them more visible to Drivers of conventual ballast trains.

Over the years the on-track machines concept developed in to the huge road railers costing hundreds of thousands of pounds we see around the rail network today. (Recently several of the mega sized machines have been tested on our railway after refurbishment).

The railway owns one of the original type of machine with a flatbed work area and a small loading crane. These were often used for changing defective cross overs and similar small jobs.

Our machine, known as ‘Badger’, has a custom-built flatbed frame and strange shaped cab, but is equipped with automotive running parts. A Volkswagen 1600cc normally aspirated diesel engine drives a hydraulic pump which powers the road wheels for propulsion or if selected the crane unit for lifting. It is fitted with a 1982 Ford Sierra braking system including a strange looking hand brake. You get the general picture.

It’s thought that our machine was manufactured in the early eighties based on the age of the automotive parts.

After many years of hard work on the network 'Badger' was retired and (its thought at the time) ended its working days helping to rebuild the Epping Ongar Railway.

After a number of serious mechanical failures, it was estimated the coast of repair was beyond economic reason. She was dumped in the sidings pending scraping. Here she stayed for more than three years. Corrosion and frost damage caused further issues. Was this the end of the road for 'Badger'? Was she off to the scrap yard in the sky?

Along came a mad engineer (mad, as in willing to take on such a no hope project) - better we keep his real name to ourselves to protect his identity so I will just call him Roger!

Roger spent his working life, well... engineering things. Rumour had it after retirement he was a bit bored and wanted a real challenge. In the 'Badger' project he found it.

Roger’s proven track record (excuse the pun) convinced the railway to invest real money in the project. If anyone could, Roger our mad engineer could get 'Badger' back to a new life on the iron road. Roger put together a small team. 'Badger' came in from the cold to her new found place in our shed-come-workshop at North Weald and the project was off and running.

She was jacked up and lowered on to hard wood blocks to allow a full investigation of her issues. 'Badger' proved to be a classic preservation project, you get on top of one system problem only to find another underlying issue. A good example of this was the engine coolant system. Both fixed copper pipes and flexible pipes were in obvious need of replacement. All looked good but when tested coolant was found to be leaking from the radiator expansion bottle, engine block and heater matrix (yes - 'Badger' had a car type cab heater.) The engine block problem was traced to a blown core plug which it was thought was caused by lack of antifreeze and many years sitting in the sidings. 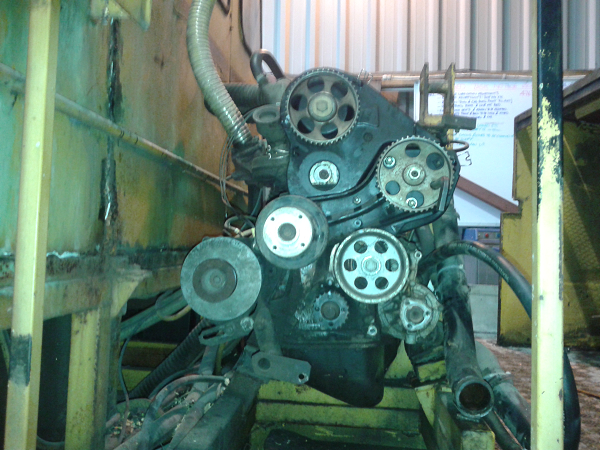 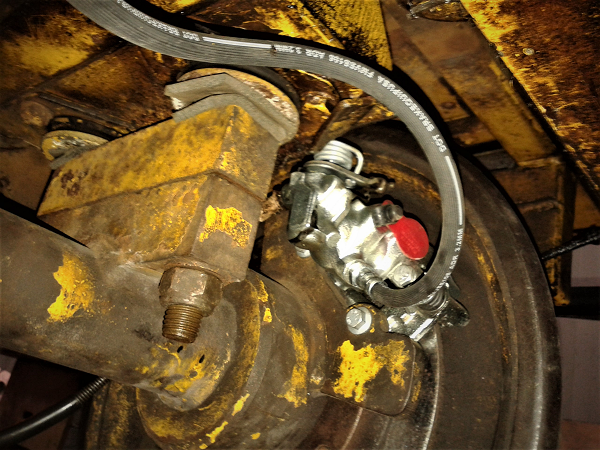 Pictures: Badger's engine undergoing a rebuild, and part of the braking system.

The leading axle/wheel set and bearing was found to have been refitted at some stage incorrectly which caused pressure on the bearing and wheelset miss alignment. This resulted in a gauging problem and was reported to have caused a number of minor yard derailments. The bearing was striped and rebuilt and the axle reassembled. This proved to be a major re-engineering part of the project.

The braking system turned Roger into a bit of a detective; hunting the internet for a company which could help find replacement auto brake parts from thirty-five years ago. Surely sourcing these was not possible? It proved no challenge to great Roger. He found a company ‘Past Parts’ which not only could identify the parts required but could supply the thirty-five-year-old Ford braking system new and complete.The shinny new parts of the new braking system and pipe work has been fitted and fettled. (sounds like a daunting task alone).

The diesel engine has had much remedial work completed including a new cam belt. I was listening to it on tick over and I must confess that I had forgotten the old fashion diesel engine rattle when compared to modern diesels. Remedial work also completed on the hydraulic drive and crane.

Another big challenge was the wiring or what was left of it. I believe the plastic insulation must have kept a few rodents going as a food source through the winter. The little machine has almost been completely rewired. Lots of other remedial jobs were required -  some large, some small; an example being making up lighting fitting brackets.

I was most surprised at the number of corrosion holes in the cab roof. It resembled a colander rather than a roof - all now fixed of course.

Now for the go faster goodies

A rear-view camera and monitor has been fitted. And just to be able to see and be seen many, many new LED lighting systems in both red and white (lovely!). For security patrols in the forest section of our line, a roof strobe lighting system (flashing lights) and more LEDs are to be fitted.

After more than a year’s work (untold hours of thought and lots of money) the little machine was removed from its blocks and lowered on to its road wheels. After some more fine fettling 'Badger' was tested in the shed and all systems worked. The next day, a pilot Driver was supplied and after more than four years inactivity 'Badger' was taken for a trip to the Epping end of our line. 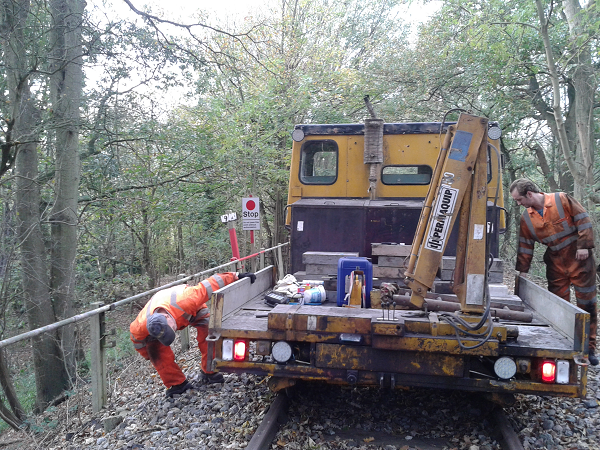 Checking all is well during the test run.

No problems were experienced.

'Badger' was returned to the shed and her paintwork striped back to bare metal ready for a fresh coat of high visibility yellow. Once completed she will be given another shake down test and if all good she will be handed over to our engineering department.

A big well done to Roger and his team. 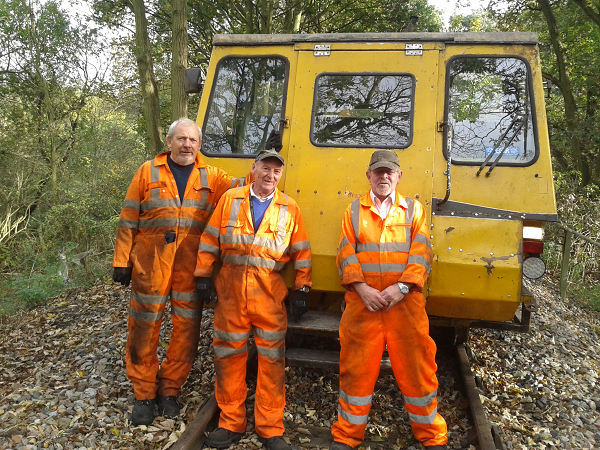 Roger and his team with 'Badger' in Epping Forest