The other day I was looking around North Weald depot and station. Stabled there were a class 37, 20 and 31 locomotives, two class 03 locomitives and a two-car diesel multiple unit. In the shed was a class 47 locomotive and another railcar coach. Just arrived, being unloaded on the pad, were two 1980s built eighty-ton ballast wagons which had been rescued from scrap. There was also a rake of British Rail Mark one coaches.

To help pay my mortgage when I was a young driver at Stratford depot, I used to volunteer to drive some of these very Locos and haul the actual wagons on Saturday nights or Sundays on ballast workings. Its seems, unintentionally, we are recreating a mini Stratford Depot and Leyton Ballast yard and may be a bit of my youth in the heart of Epping Forest!

There is more to the Stratford connection than you may think on our line. Certain sections of our track came from the Stratford to North Woolwich line (after the start of the conversion to the Docklands Light Railway and, later, Crossrail) as did the more modern colour light signals. Some of our track side phones still carry Stratford signal box signal numbers.

Recently I have made a number of train trips around the London area. How things have changed. I travelled through many of the areas I used to sign and work over as both a passenger and goods train driver, regularly on some routes now and again on others. Now, quite a few years on, I was most surprised at the changes in the railway system (for the better) and the changes in the surrounding areas. Seemingly new flats or apartments, as the developers would have us believe, are built on every scrap of spare land.

I travelled to Old Oak Common for the Open Day last September from Strafford via the North London line. Transport for London and Network Rail have invested huge sums of money in the system on both the trains and infrastructure, with the new service to Clapham Junction and not forgetting the new South London line. This was a far cry from my time when the engineers struggled to maintain the signalling system due to its age and the lack of suitable spare parts. We also had, at first, cast-off Diesel Units, then, later, Southern class 416 two car units and, later still,  class 313 electric units. At that time the railway was recovering from threats of closure and we were very much a make do and mend railway.

This was an interesting time for me, as I was often asked on behalf of control, by Stratford Loco foreman to ‘Go down to Stratford low Level Station and Sort out the railcar service’ after freight train or signalling failures resulted in disruption. I would study the unit and driver’s diagrams and attempt to put the service back together. After having a ‘real train service’ to play with model railways never again held much attraction for me.

The same type of huge investment applies to Crossrail (Elizabeth Line) from Shenfield. Vast changes have taken place and the new trains are now starting to run. Once the new Crossrail tunnel from Stratford opens the new trains length will be increased by two coaches to nine longer cars. Platform seventeen and eighteen in Liverpool Street will then be closed. With Platform sixteen rebuilt all of Liverpool Street will then be twelve car platforms.

The Railway were invited to exhibit our own class 31 locomotive at the last open day at Old Oak Common before closure. It was a great day out with lots to see and do. 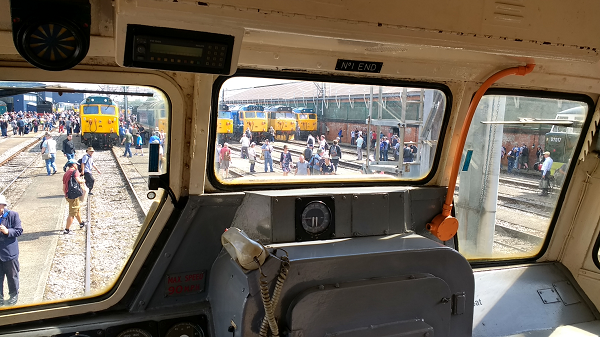 The line up of class 50 locomotives at Old Oak Common Open Day as seen from our class 31.

In common with most of the great London former Loco Depots such as Stratford, once the HSTs are displaced the Old Oak site will close and be developed as an international Station on the High Speed 2 route and the rest of the land for a shopping centre and housing. With the New Great Eastern Electric Unit Depot being built on a Brown Field site out at Manningtree, it does seem that the days of the great London train depots are over.

While at Old Oak Common, the class 31 had her tyres reprofiled and on return she was fitted with a complete set of new brake blocks. 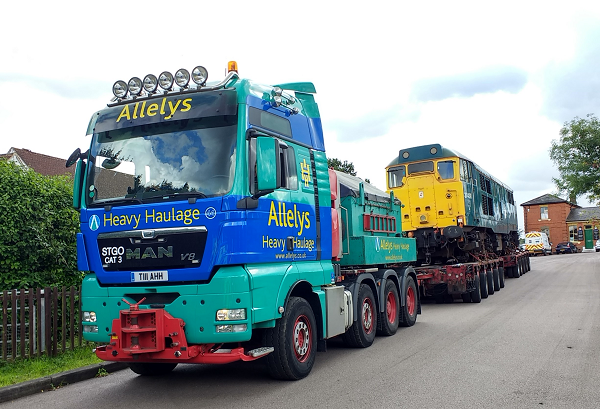 Apart from normal maintenance exams no other work has been required.

The Railway were lucky to have class 50 locomotive, 50026 "Indomitable" pay us a short visit, directly from the Old Oak Common Open Day. The locomotive has taken 20 years to restore from scrap yard condition. She is now resplendent in Network Southeast colours. I believe the locomotive is one of the best restoration projects I have seen to date. The hugely powerful English Electric V 16 diesel engine putting out 2700 hp. This locomotive certainly had the cleanest engine room I had ever seen.

I had the privilege of driving the locomotive on a number of occasions. I was very impressed. I remember these locomotives in 1967/8 (when I was an engine cleaner) when brand new mixing it with the last few steam engines around Carnforth. The class 50s going over Shap with express trains on the west coast main line. 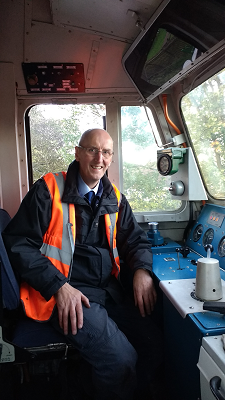 Driver of the final class 50 trip before it left the Railway. Note the spotless cab!

The Railway held a celebration of Class 50 at 50 years of age on our 50-mile diesel diagram. 50.50.50. Clever! I was in luck again to be booked to work the last round of the day before she left us.

Normal maintenance exams have been undertaken and a number of new brake cylinders were fitted and four new brake seals replaced. A number of other minor jobs were also completed. The diesel engine and engine room has also been cleaned.

The visiting Class 20 locomotive developed a vibration when under load. The issue was traced to two heavy duty securing bolts under the diesel engine which should hold the main generator in place shearing off. This will be quite a complex operation to access and replace these bolts. The locomotive has been stopped pending repair. 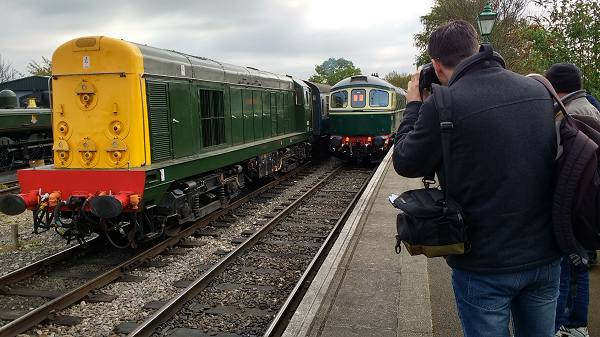 The class 20, and visiting class 33, 33002, attract the attention of the photographers during one of our diesel galas.

The locomotive resides in the shed. The centre roof section has been removed for repair. Extensive rusted areas both on the roof joints and the top section need cutting out and replacing. Once this section of roof has been completed and is ready to be refitted, work will then start on the exhaust silencer which also requires extensive work. The other two sections of roof also need remedial work. It is planned to carry out this work with the roof in situ. Other sections of body work also need replacement. Overall this is a very large job. The bodywork has started to be sanded down for a repaint once body work repairs are completed. 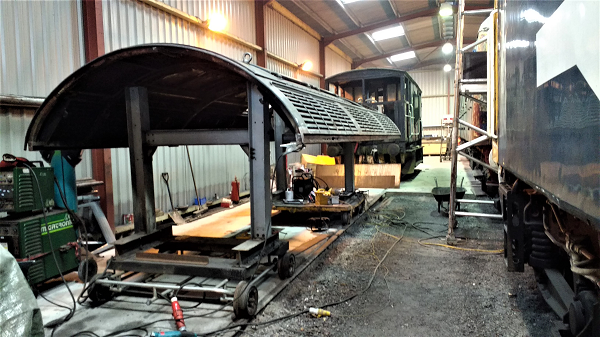 The roof panel of the class 47 removed for repair. The "shark" brakevan behind is about to see the start of it's own refurbishment.

Normal maintenance work has been undertaken.

Progress with the bodywork rebuild off-site.

After many years out of use one oil fired heater on each car has been reinstated. Number two engine govenor became defective and has been replaced completely. There has been a number of minor jobs completed, A new hand rail has been made up for the power car's drivers door. This is awaiting fitting.

This is the largest restoration job undertaken by the Diesel Restoration group (with more than a little help from our friends in the Carriage and Wagon teams). The task seems to get bigger by the week.

I struggle to illustrate the work we are doing on the railcar project at the moment.  My editors over the years like photos. One picture’ is worth a thousand words and all that, but how many times can we put up pictures of a box of rust - being the corroded remains of the main structure - or a stack of rotten wood  - being the remnants of a guard’s compartment door. In fact, we found structures were there was nothing left to take pictures of!

A complete new Guards compartment door has had to be made up. The only section of the old door we could salvage was a small section of the outer skin and the lock mechanisms. I am told that as the door has parts of the original door be they be ever so small the door is technically rebuilt which in restoration terms give the team more brownie points. Everything else has had to be made from scratch including the complete curved hard wood frame. We need the completed door to obtain the hinge reinforcing plate positions on the first of the curved steel frame uprights. This has held up the main frame rebuild. This is a highly skilled job combining both woodwork and metal work. Just getting the basic raw materials together proved to be a challenge in itself. 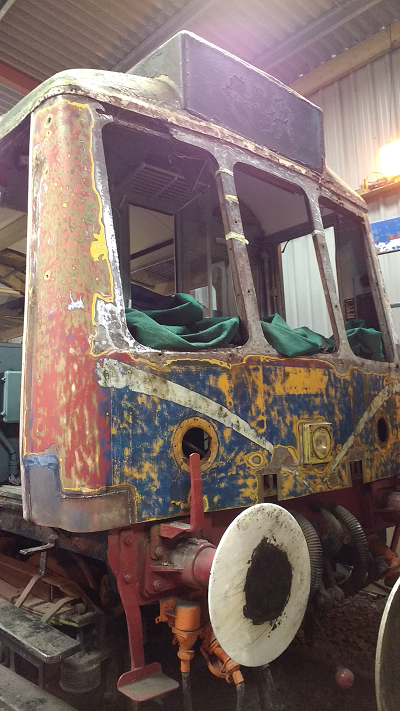 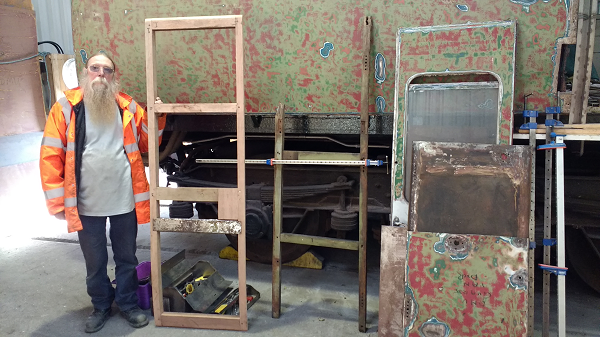 The DMU cab stripped for repair, and a new guards door being fabricated.

The glass fibre cab roof has been released on three sides but we are awaiting a means of safe access to the roof and far side of the railcar. Once the cab roof section is fully released, it will be lifted off and repaired at safe ground level. The internal cab metal frame work, the cab front top and bottom outer skin will be replaced as required. There is a lot of corrosion damage to replace. The electrical team have disconnected the wiring to allow the roof to be removed.

The team have completed a number of smaller task in preparation for welding operations.

We shortly start to fabricate metal ‘filler sections’ which the passenger window inner wooden frames are mounted. The originals had all but rotted away.

The English Electric diesel engine cam shaft main bearings were found to have overheated at some stage in its life. The cam shaft which comes in two sections which was remachined but the two sections taper still need attention before the engine can be rebuilt.

At the moment the railway is getting ready for the Santa specials. Always an exciting time of year.

Until the next time