Back to the Future

Do you ever get that feeling that your past life has disappeared? Your old school has gone, the then cutting-edge office, factory, workshop or depot, where you spent so many working years, is now just a hole in the ground? That is much how I felt about my former working life…. until I came to the Epping Ongar Railway. 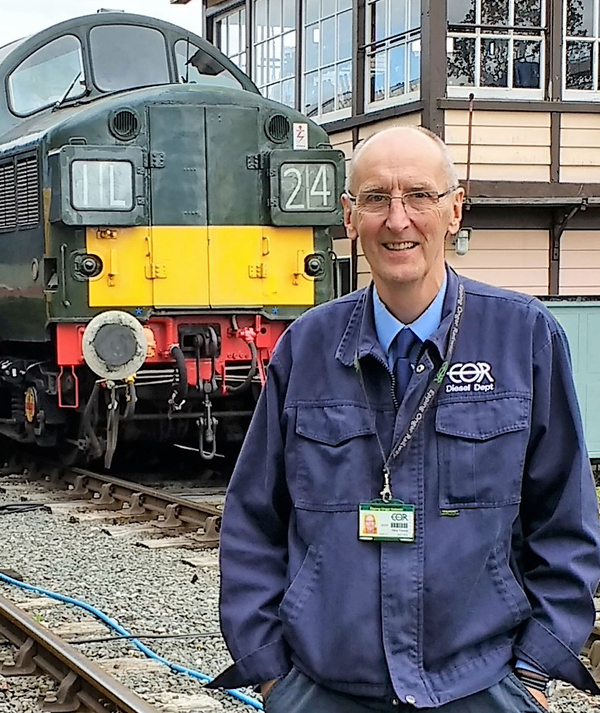 Chris Travers at Ongar with the class 37 locomotive.

To put this article in context, I should tell you that in my career, I was first a Driver and then a Traction Inspector at the long-lost Stratford Depot - now a hole in the ground - in East London. (Actually, it is called the Stratford Box, which holds Stratford International Station, which is serviced by the Southeastern high speed line). As such, I had signed for many railway routes (proving my competence), not only in the eastern counties, but also around the London area.

I was in for a shock to learn just how much of the railway infrastructure, that had once been an integral part of my every day mainline working life for so many years, had now come to join me in retirement on the EOR. 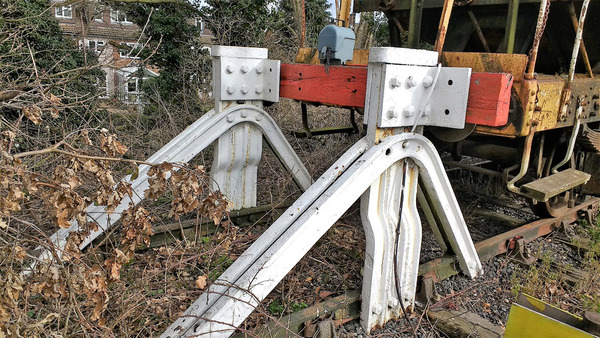 Where to start? At the buffer stops at Ongar is probably a good place.

The buffer stops, on what is the run round road, came from North Woolwich Station, which was the eastern terminus of the North London line. As a Driver, I stopped there so many times, en route from either Camden or Richmond, with many types of traction, including a mix of Railcar types, Southern third rail class 416 units and also 313 electric units.

The top half of the Signal Box at Ongar came from Spellbrook, near Bishop Stortford, on the Cambridge main line. The signal interlocking frame is the original one from Ongar, when it was in the first Great Eastern Ongar Box. When the Ongar Box was demolished, the frame was donated to the former Passmore Edwards Museum, which at that time was in the old Woolwich Station building. The frame used to stand on the museum platform and could be seen over the fence as you ran into North Woolwich Station. When the museum shut down, the signal frame was offered to the EOR, and stored at a farm at Toot Hill. 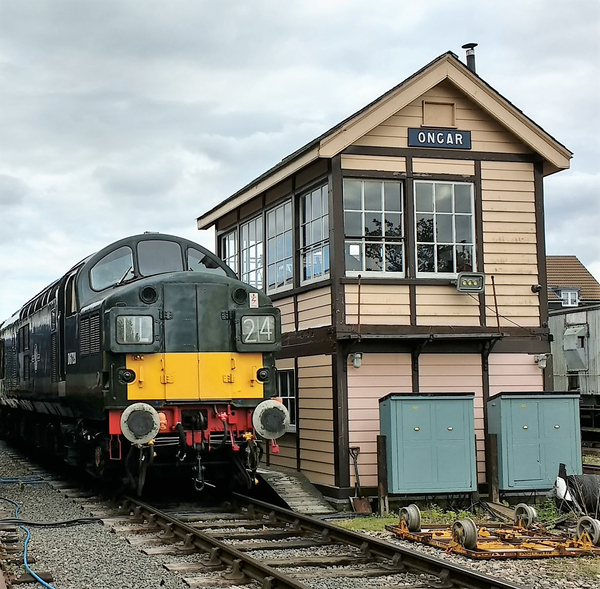 Class 37, 37029 which Chris drove on the mainline, beside Ongar Signalbox.

At 3.00a.m. on a cold damp Sunday morning, I remember making a cup of tea in this very box, while working a doubled-headed ballast train in the Spellbrook area.

Out of interest, I understand most of the track used at Ongar has been recovered from North Weald.  When the EOR took it over, North Weald was a single line; the track was removed to allow the new layout to be installed there.

With the exception of the two Great Eastern semaphore and ground shunt signals which came from Dunmow, and are adjacent to Ongar Signal Box, all the other Ongar colour light signals were recovered from the Colchester to Clacton re-signalling scheme.

With the exception of the Epping end cross overs, which were made especially, all the rebuilt track layout at North Weald came from Custom House on the North Woolwich branch of the North London Line; it came complete with a spare point blade. At Custom House, the line split into two single lines, one passenger to North Woolwich and one goods road (until closure) to the yard at Silvertown, which included the tramway. 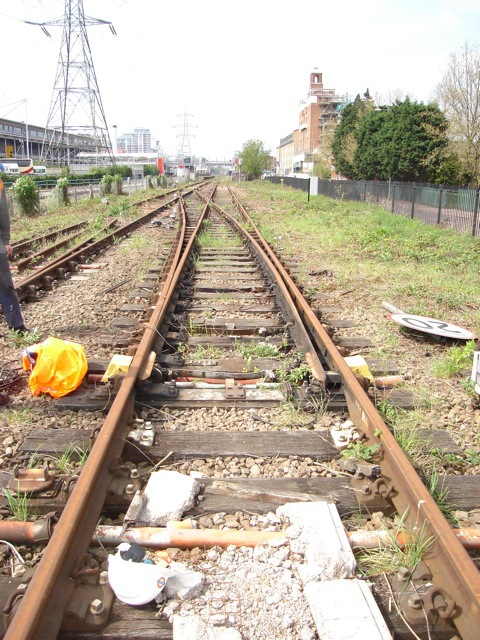 The points at Custom House which now route trains into Platform 1 or 2 at North Weald from Ongar.

The single lines passed through the now-rebuilt Connaught Tunnel. The North Woolwich branch closed about ten years ago and was rebuilt as the Docklands Light Railway branch, with the Southern section becoming part of CrossRail - now the Elizabeth line. With the extension of the North London line onto the North Woolwich branch, the track layout in the Custom House area was electrified with a third rail, to allow the Southern class 416 units to operate through from Richmond, and later class 313 units to replace the Railcars. All types of diesel locos used to pass through Custom House Station, taking freight through the tunnel to Silvertown - a very scary experience on an 08-shunt loco! Our North Weald track layout has quite a proud and historic pedigree.

The two more-modern looking North Weald section signals NW 4 and 18, both came from Custom House platforms for down single line working through the tunnels; they are now doing the same job as they did then, protecting the entrance to our single line sections. 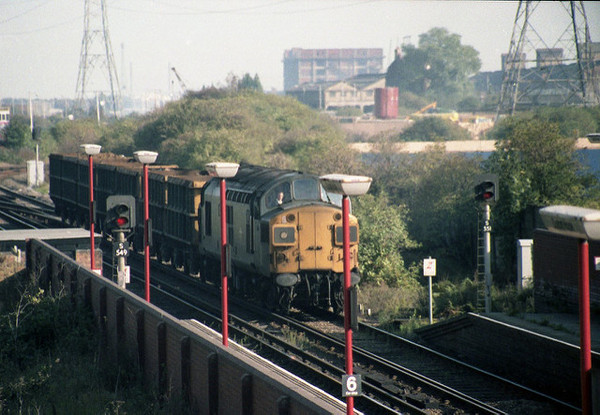 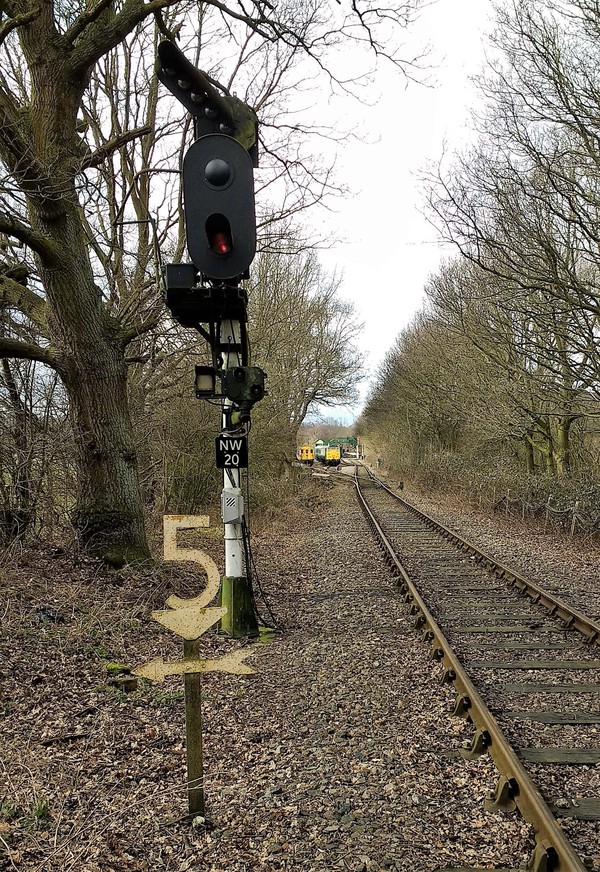 Many of our Signal post telephones also came from the Stratford area, and what is now the Colchester signalling area. I used many of these phones to contact the signallers at Stratford as well as other signal boxes.

All other North Weald colour light signals, including the wooden post, came from the Colchester to Clacton re-signalling programme.

The semaphore signals at North Weald were recovered from the Bishop Stortford re-signalling scheme. 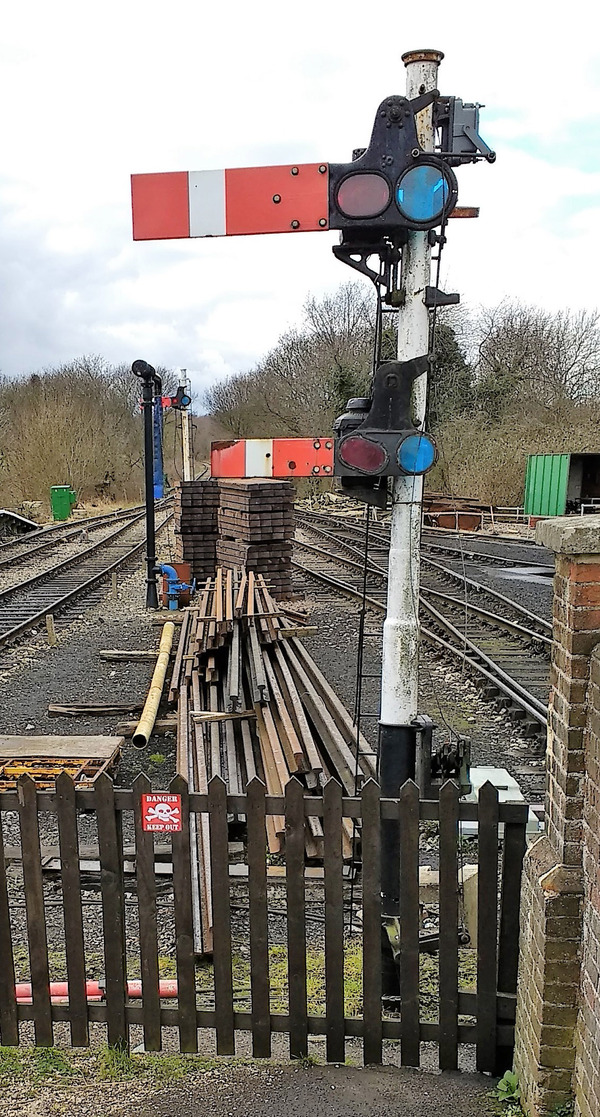 Semaphore signals recovered from the resignalling scheme at Bishops Stortford.

Even the coping stones on Platform 1 at North Weald came from…. You’ve guessed it - Custom House!

The North Weald Signal Box is the original structure, and the frame is also the original, but it was extensively re-locked. Because the layout of the track had changed, the electrical and mechanical interlocking of the lever frame had to be altered, to suit the new track layout arrangement. Almost all the equipment was rebuilt or replaced for the new upgraded layout. North Weald Signal Box is now a mini power box, with almost all the levers working electrical switch gear to control signals and points. There are just a few manual levers remaining, which operate the working semaphore signals.

The level crossing gates at North Weald came from Chitts Hill, near Colchester. 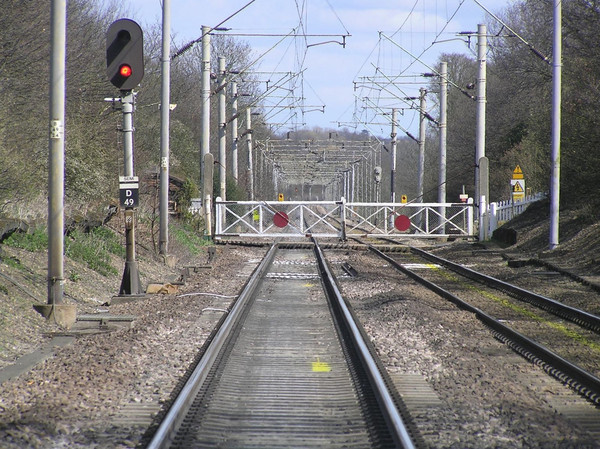 Another piece of my former life from a route I used to work over, is the North Weald Westinghouse electrical wiring and relay frame in the relay room. Its original home was the massive Southend Central Box on the LTS, now C2C line.

Recently, I was looking around North Weald Depot and Station. Stabled there were Class 37, 20 and 31 locomotives; two Class 03 locomotives, and a two-car Diesel Multiple Unit. In the shed was a Class 47 locomotive, and another Railcar coach. Just arrived, and being unloaded on the pad, were two 1980s-built eighty- ton ballast hopper wagons, which had been rescued from scrap. There was also a rake of British Rail Mark One coaches; in the sidings was our Thumper unit, which is a close cousin of the class 416 units. When I was a young driver at Stratford Depot (yes, I once was young!), as well as my normal driving duties, on Saturday nights or Sundays on ballast workings. I used to drive some of these very Locos and haul the actual wagons.

Apart from the locos, signals and track, another aspect of the EOR that brings back memories is the fleet of heritage buses that operate between Epping, Ongar and North Weald.

When I was very young, I would travel with my mother, on the 66A bus – a red RT double decker – to Romford market. On other occasions, we used to get a Leyland RTL double decker from Liverpool Street to Hackney, to see relatives there.

I also remember riding on a RF red single decker bus from Bromley by Bow, to see my grandad in Hackney.  Because there were many low bridges on this route, the single decker buses presented no problems with clearance. 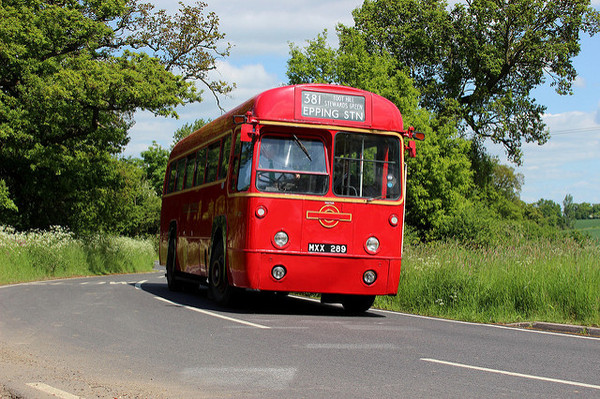 A red RF bus on route 381 that runs between North Weald station and Epping during the summer.

The wheel has now come full circle: my grandsons have visited the EOR, and had a ride on the single decker bus. The children had a wonderful time – it was a very bouncy ride as we went through the villages, and they were asking for the bus to go faster! It could well have been the same bus I travelled on all those years ago, and now encompassing 5 generations of my family.

As you can see, my years volunteering at the Epping Ongar Railway really has been “Back to the Future!”

This article originally appeared in "Mixed Traffic", the journal of the Epping Ongar Railway Volunteer Society.